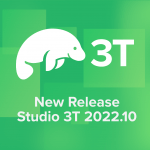 As we come to the end of 2022, the last release of the year focusses on polishing existing features and adding guard-rails to some functions. Studio 3T 2022.10 features auto-completing brackets and quotes, faster smarter tooltips, sortable tasks and more space to edit your aggregations.

IntelliShell users will welcome the arrival of auto-completing brackets and quotes in the editor, which place the cursor inside the newly complete brackets. If you prefer to type all your parentheses, you’ll find a preference that lets you disable this behavior in the General tab.

Studio 3T’s ObjectID tooltips are full of useful information, but they’ve been known to get in the way for some users. In 2022.10, we’re making sure they don’t cover anything with some new smart positioning.

For each set of results you get from IntelliShell, you get a results tab. We’d previously set a limit of ten result tabs but we heard users who wanted more tabs. We’re all for enabling power users so now, you can set your maximum number of IntelliShell tabs. It’s a preference you can control in the IntelliShell preferences globally.

Of course, too many things can also be a problem. Like too many error reports. They can make a script hard to fix up, so we’ve added a limit – 100 – to the error reporting to help you see what’s wrong.

Alias Tooltips: People love Aliases and Notes but were saying they felt tooltips with aliases were slower. We’ve boosted the Alias performance in 2022.10 to get it back up to speed.  We’ve also improved the Add Alias dialog so it’s clearer when you have a clashing alias. We also made sure you can see aliases and notes when you are autocompleting in IntelliShell. And we’ve made aliases visible inside Data Masking.

Tasks: Once you’ve started with Studio 3T Tasks, you’ll soon have lots of Tasks to work with. We’ve added the ability to drag and drop Tasks to reorder them in the Tasks view to make them easier to organize.  We also made Rename Task more visible by adding it to the toolbar.

Connections: Some MongoDB database configurations, like LDAP authenticated ones, don’t like multiple pooled connections and make users authenticate multiple times. We’ve added a preference to connections that lets you set how big your connection pool is to address that and give you more control.

Export: When Exporting to another collection, it is now easier to select Add Database and Add Collection when choosing a Target collection.

Security: We have made changes in our development process, aiming to reduce time to respond to security vulnerabilities in libraries we use. We now have integrated automated vulnerability checks on every build.

Studio 3T users are a valuable source of feedback helping make the application better. For the release of Studio 3T 2022.10, we’d like to thank: Jan Tischler and Hannes Schurig for reporting tooltip issues in the Visual Query Builder, Alejandro Aguilar for finding M1 Mac Mongosh issues, Wernfried Domscheit for isolating issues with error reporting and back-ticked string highlighting, Bjorn Harvold for noting .save() shouldn’t be an autocompletion and Wilson Horrell for suggesting that we autocomplete brackets and quotes.

Reschema – Renaming fields in Reschema shows as a modification in the tab.

For the full history of changes in Studio 3T, see the change log.

Auto-update in the app, or start your free 30-day trial today:


Go to Source of this post
Author Of this post: DJ Walker-Morgan
Title Of post: What’s New in Studio 3T 2022.10 – Polish and Safety
Author Link: {authorlink}

A peculiar curiosity we found while working with MongoDB transactions in Node.js

A peculiar curiosity we found while working with MongoDB transactions in Node.js

Social media App MERN tutorial: How did he connect/link both the Users and Posts DB

Appium vs. Selenium: What’s the Difference?

Appium vs. Selenium: What’s the Difference?

What is Penetration Testing and How Can it Help Improve Your Cybersecurity?