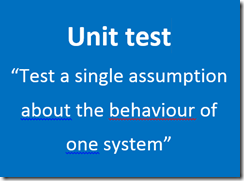 Powershell has really gained a strong momentum the last 3-4 years and is becoming increasingly the scripting language of choice if you live in the Windows part of the IT world. Together with the increasing popularity of the Devops phrase, unit testing is a key factor going forward.

This is part 2 (Part1) of a small series of posts related to unit testing in Powershell. You can read the first post her.

In the previous post we presented the Scenario we will be working with and the API functions that our SillyModule will wrap logic around.

The context of the module is pretty simple. We need cmdlets to receive a list of persons or groups. The list may be filtered on a specific property (Name or ObjectID). Next we need cmdlets to update/modify the properties of a person or group. Currently our module does not support adding or deleting objects.

Functions exported from the module:

To additional helper functions added that we have not talked about.

To better understand how the cmdlets works, I have created a very simple flow chart for Get-Person and Update-Person. 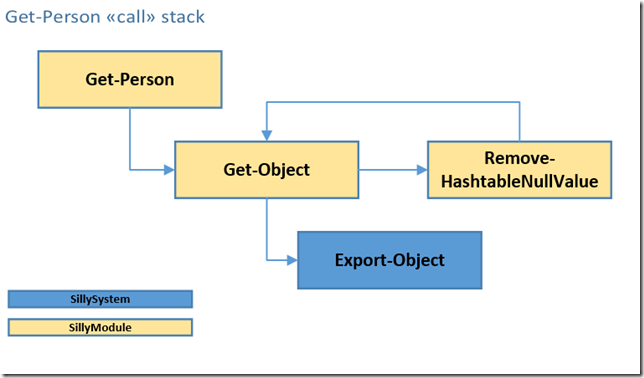 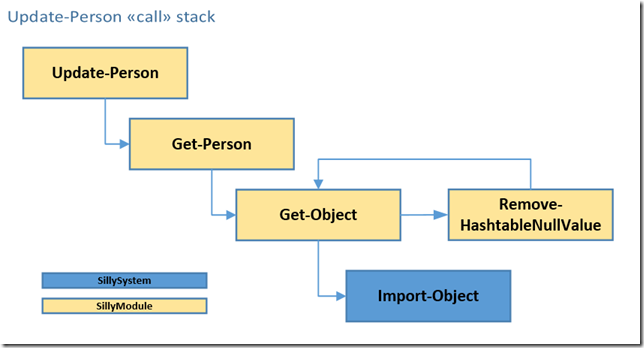 Clone them or download them from GitHub to play around and see how they work. Run the build.ps1 script to build the module.

Please bear in mind that I am not an expert on unit testing and I urge anyone with experience and knowhow to guide us if I make the wrong turn. If you have not done it yet, clone or download the Pester module from GitHub.

I usually start in the middle of the call stack, that is as close as possible to the functionality that is not under my control. In our scenario that would imply that we should start with Get-Object function.

The Pester module comes with a function to help you get started with testing. It is called New-Fixture. It will generate 2 files:

What happens if we run this:

Sweet we have our test file. Lets crank it open in ISE and have a look:

Turns out a Pester unit test is just a script file with some magic and keywords that describe (duh) the unit tests. Notice the red arrow and the . (dot). Pester dotsource the Get-Object.ps1 file which contains our function Get-Object into the script scope of the test. If you don’t know what dotsourcing is, look it up it is out there.

There are some rules. In my testing I use three keywords: Describe, Context and It.

Now to the fun part. The It block contains the actual testing. In our current test is says that $true should be equal to $false. No need to say that this test will never pass in it’s current form. To run a test-file, we use the Invoke-Pester cmdlet and give it a test file. Lets run it and confirm:

It says it expected the value to be False, but it was True. Change the test to $true | Should be $true, save the testfile and run it with Invoke-Pester:

There it passed the test, which should come as no surprise to you. It is a silly test for a silly module! Time for some more realistic testing for our Get-Object function in the next part.